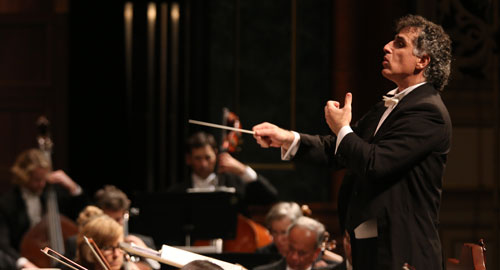 The Santa Barbara Symphony, under the baton of Maestro Nir Kabaretti, will present the world premiere of Machpelah, the newest work by brilliant young Italian composer Cristian Carrara, Saturday, Jan. 16, 2016, at The Granada Theatre in downtown Santa Barbara. […] “The recurrent theme throughout this rich program is dialog, musical and otherwise,” said Maestro Kabaretti, now in his 10th season as the Santa Barbara Symphony’s music and artistic director. “We have the privilege of premiering a work by one of Italy’s leading composers that is in essence a dialog between cultures through two soloists,” he said. “At their core, the other compositions on offer are similarly about interplay and reciprocity, concepts that are especially relevant in today’s world. These are concerts not to be missed!” Carrara describes his composition — whose complete title is Machpelah: Dialogue for Violin, Cello, and Orchestra — as a musical conversation about the enduring nature of love.   “Machpelah is the Hebrew name for the Cave of the Patriarchs, the place in the heart of the old city of Hebron in Israel’s West Bank where there are the double tombs of Abraham and Sarah, Isaac and Rebecca, and Jacob and Leah, considered to be the Patriarchs and Matriarchs of the Jewish people,” explained Carrara, a resident of Rome who will be on hand for both concerts in January. “Inspired by this place, my double concerto is a hymn about love between men and women. In this work, the solo violin and cello in effect discuss love,” he said. “I wanted to celebrate the eternity of love, but also highlight the possibility of peace, of dialogue, between cultures and religions, especially in this time of conflict. Love can defeat fear.”
Read more:
Noozhawk
The Symphony