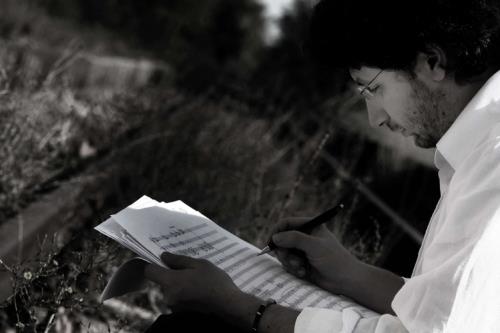 […] Cristian Carrara is surely one of the most prolific and original composers of his generation, whose talent – and you don’t have much of that these days – is recognized by everyone in Italy and abroad and it clearly emerges also in War Silence. […]

Maestro Carrara, silence is a theme often applied in your composer’s activity; where has you found it in a dramatic experience as the war?

«At first sight, the war appears us as something deafening, upsetting, powerfully noisy. The sound of the weapons, of the collapses, of the screams. But in the war, under the cracks of the distruction, they hide, or they still open, spaces of silence. The silence of whom doesn’t have anything, not even tears, of the uninhabited houses, abandoned, of the empty roads. The silence of whom hides, of the fear. The silence of the secret hides, of the goodbyes. Many silences are born from war. This work tries to put them in row, giving back to them life. In war, as the embers under the ashes, the silence keeps humanity alive».

The composition War Silence is part of a “trilogy” of dialogue and peace, which also includes works Machpelae and The Waste Land: what is the common denominator of these operas?

«The three works are all a reflection on human conditions. They are essentially concerts for solo and orchestra, where the solo is the man in the history, in time, in the world (orchestra). War silence is a concert for solo and orchestra dedicated to the First World War and to my friulan lands. (It is the willful search of the silence among the loud voices in the conflict. Machpela, Hebrew rod for “the couple” and for the place in Hebron of the tombs of Israel’s Patriarchs, is a double concert for violin, cello and orchestra. Here love is the theme, and its chances to be eternal, in its broader meanings. From dialogue man/woman, proper of the Song of the Songs, up to the dialogue between cultures and religions. That’s why it’s a concert for two solo instruments. There’s no dialogue, and there’s no love, if there’s not a “you” opposite me and that wonder me. At last The Waste Land, based on the poem by Eliot, is a concert for viola and orchestra. I’m writing it in these weeks. I wish it was a reflection, from Eliot, on the condition of man today, tied to the spiritual aridity that contemporary society tries to impose us».